ANA MARIA MICU
The aftermath of a losing battle legitimizes the option of gathering in the same exhibition artists who express themselves in various styles and areas but who are not at all foreign to the sisyphic nature of what it means to produce meaning into and through art. Each work is initiated by repositioning and readjusting to everything that is already known, chosen, conquered. Each work is approached with the help of a new set of tools, tailor-made and in the rhythm given by the type of conceptual, emotional and technical weapons that characterize our world. Each work is waiting to receive or form something, it does not lurk like a huge and empty field, likely to accommodate any new note, legend, script or scenography. A new epithelium that does not protect, does not contain and does not perceive and filter reality. As artists, we assume the inherent losses of these epithelial successions, accompanied by a constant sensation of "molting" and "renewal." It's harder to identify what we gain but we always feel what we lose. A "shell" in which each molecule is neatly and accurately listed. Either we gracefully abandon it or forcefully detach it, always another epithelium below ready to take its place. We do not know what happens to these discarded epithelia, but we try to guess. We will probably find some of it intact over the years, like the scaly skin of a snake that seems to be present in the full detail of its morphology, but inside it is empty; it is a shell, a surface that once took the form of a present. A shell that responds to a well-defined moment in time and space, remains frozen there as the content traverses it, overtakes it and abandons it.

Epithelia discarded, some intact, some scarred, broken and alienated. The works embody the multiple facets of the self that remain hanging in the vestibule of our past and present life, a skin that folds and falls discovering a new variant of ours, familiar to us but still foreign to others. Molds, detachments, ruptures, folds - all remain imprints of a moment, of a personal experience mimicked in oils, chamotte of pixels.

The exhibition concept will be marked by a dominant chromatic, that of the terracotta, similar to the color of the epithelium that goes through different thermal stages, each degree marking a thought, an emotion, a lost or outdated segment. Each artist deciphers and adjusts their own message through the chromatic ranges developed from the proposed auxiliary chromatic ranges.
my works within the project

My contribution consists in developing a large-scale wall drawing out of black self-adhesive vinyl cuttings, around a finished painting, during a time period of several days prior to the opening. Instances of the drawing progressing and additional manipulations of the marks will be used to create a stop-motion animation meant to be exhibited in a loop, on a TV screen.

Since my painting depicts a pile of vegetal debris, observed in a niche of my apartment, my concept for the animation is to think of "an imaginary walk in nature", an action in which a human figure performs a motion in a circle. I also reserve the opportunity to be inspired by working on-site, fully trusting the ability of one image to generate another, given an observant individual that is willing to capture it - a role of which I am aware and capable to perform. 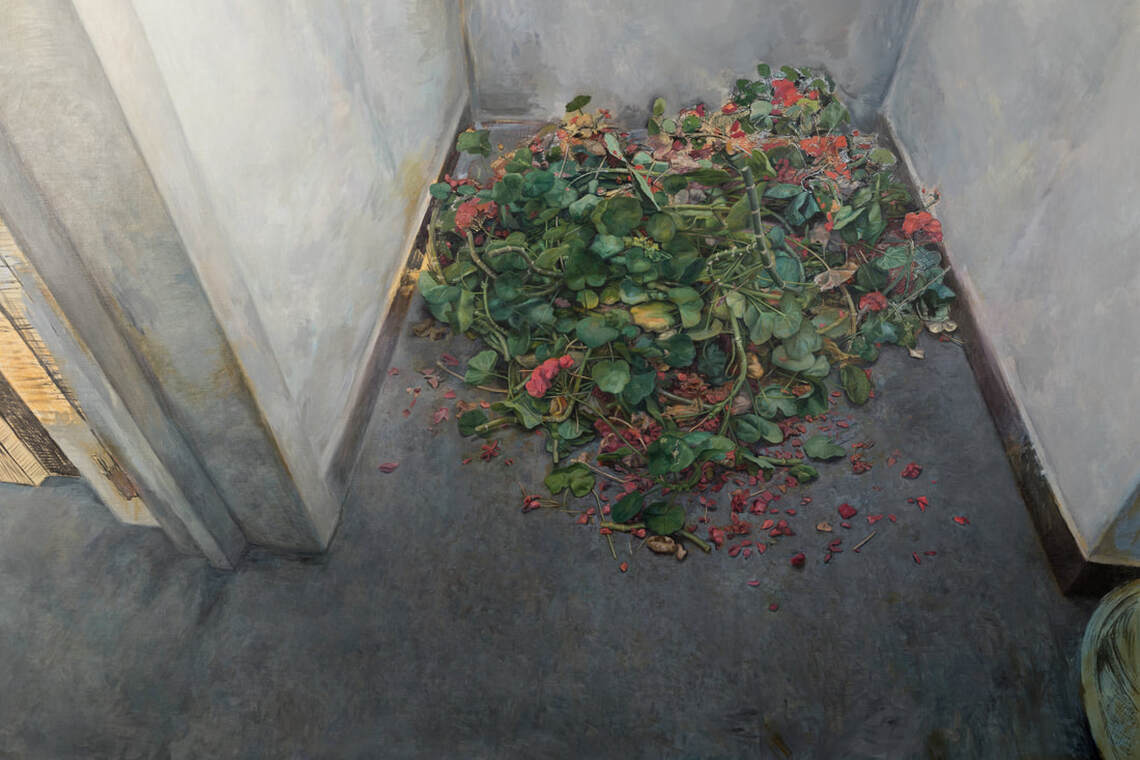 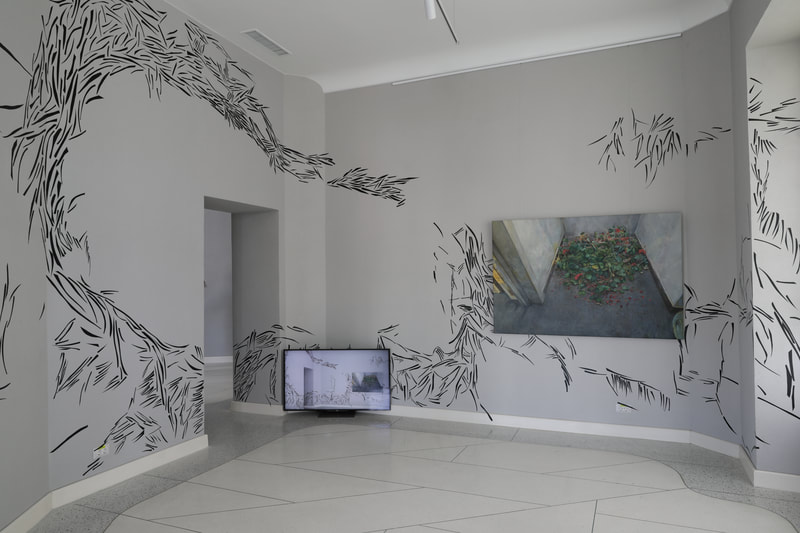 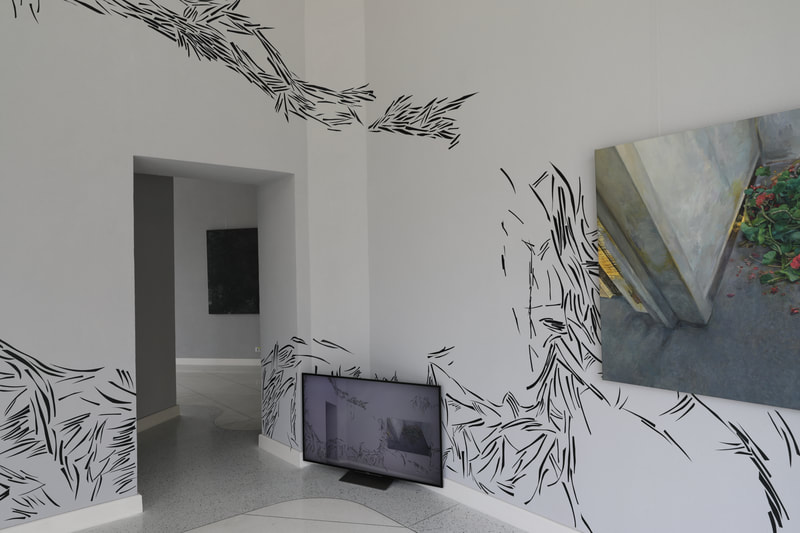 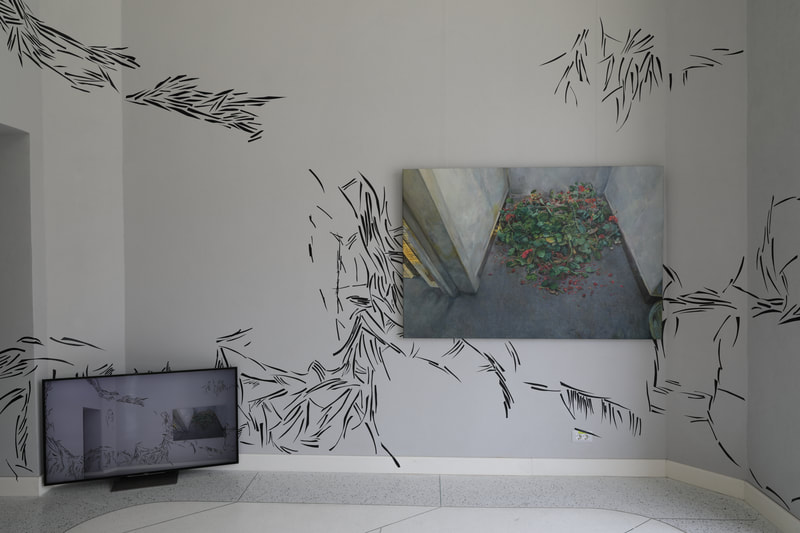 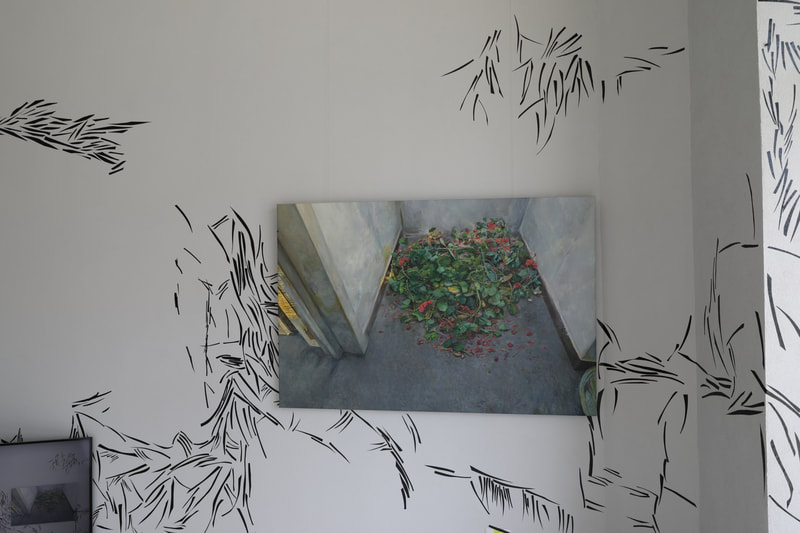 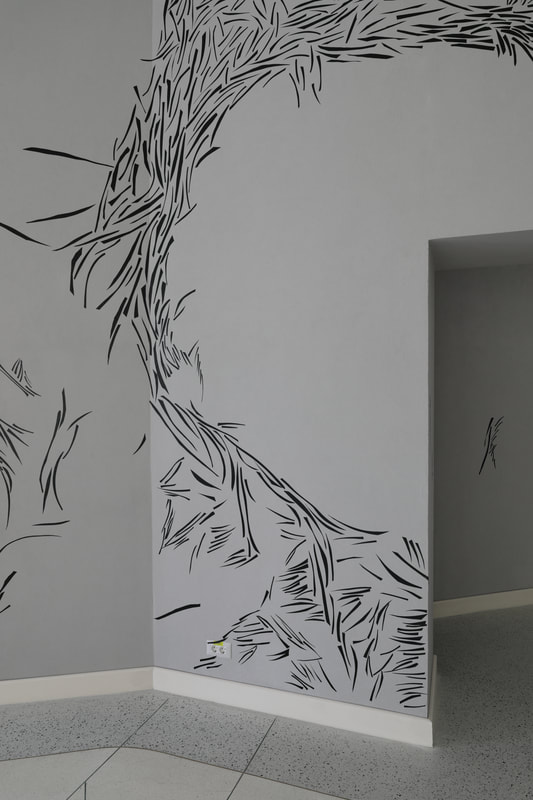 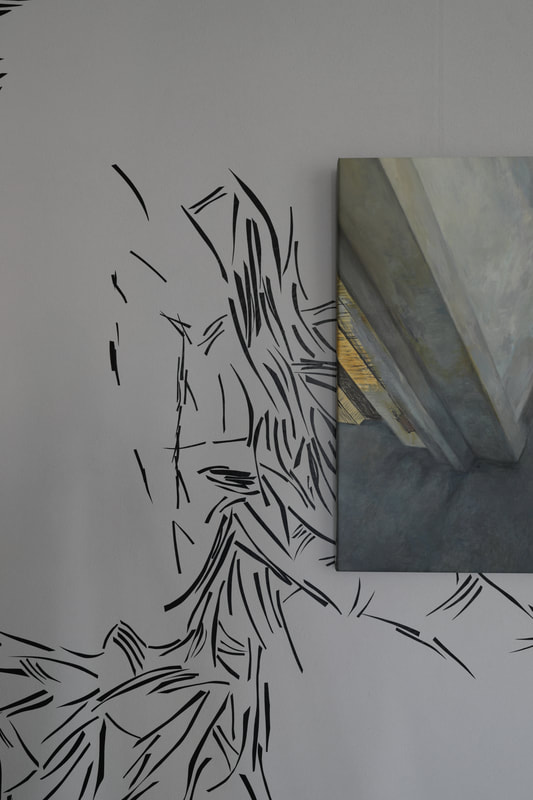