The mere relocation does not separate the production of new artworks from previous ones. This small observation determined us to favor the idea that art creation is a symbiotic process with ongoing ordinary life in its particular routine, a mimic of sorts applied to normality’s background. The intention of this exhibition, as suggested by the “tableau vivant” reference from the title, is to reconstitute a framework in which this mimic of ours could be also reinterpreted by the viewers. To encourage this, we present images deprived of any human presence, so they would constitute a décor for an action that only the visitors would animate.

The entrance to the exhibition is made through a slideshow that documents images that theoretically could be called studio views, but in our particular case differ from what is usually recognized as such. We work in improvised rooms meant to function somewhat as art studios, without ever being fully equipped with professional furniture or tools. The archived visual consequences resulted from this fact of life are illogical images, inexplicable scenes, and spontaneous juxtapositions, in most cases dictated by the need to adapt, to use whatever is first available. We, therefore, encounter certain poetry in these situations, because the object's primary purpose is diverted into an aim whose necessity perpetually remains changeable, questionable and far from obvious.

Just as our studio images contain paintings, we include in this exhibition 2 painted works that are presented in such a way that they seem to be part of a larger context with an open and ambiguous purpose. The installation “Dreamcatcher” speculates around the domestic habit of decorating the bedside wall with a painting. The bed is here represented through a minimalistic improvisation – a thin mattress, a pillow and a white sheet. All of this is covered in tools and objects left for us to use during our residency. Above the bed hangs a small sized painting illuminated by a lamp. The painted image represents a tunnel piercing through a stone wall towards an empty landscape. In the blackness of the tunnel's ceiling, one can see The Moon surrounded by the flickering lights of the deep space, a scene that breaks the rules of known reality.

Besides the installation mentioned above, the exhibition presents another painting (approximately 200 x 200 cm) in the form of a canvas taped directly on the wall. The work will remain unfinished for the opening of the exhibition, thus discussing again to which degree this painting is an artwork, a realistic décor similar to illusory panels employed in theaters or a vehicle for an open image, which begins behind the canvas and continues in the space in front of it, integrating the viewers’ presence. This painting depicts the interior of a mountain cabin with an open door towards the outside. Hanging on the wall next to the door, the viewers can note a deer head trophy. Overlapping the antlers, reproduced in graphite, there is a patent drawing of Nikola Tesla for "Apparatus for producing electric currents of high frequency and potential".

with the support of Österreichisch-Rumänische Gesellschaft 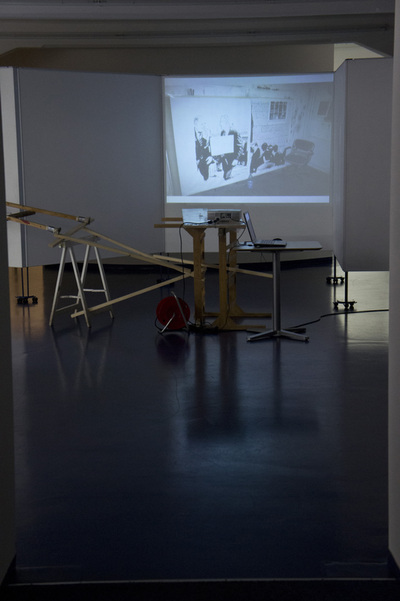 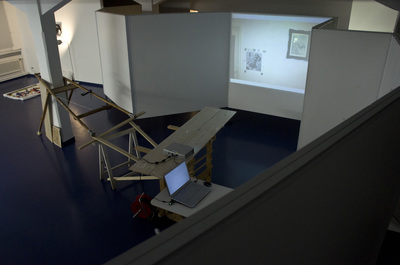 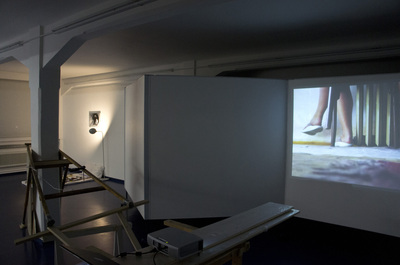 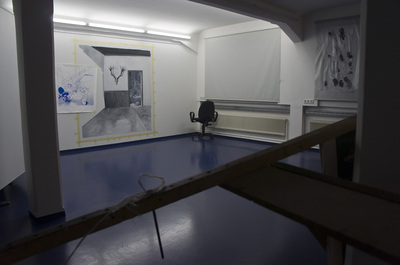 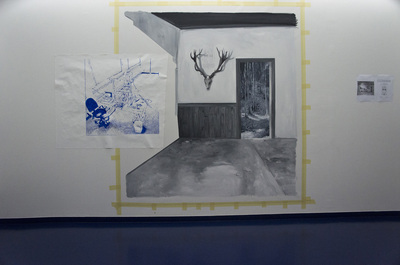 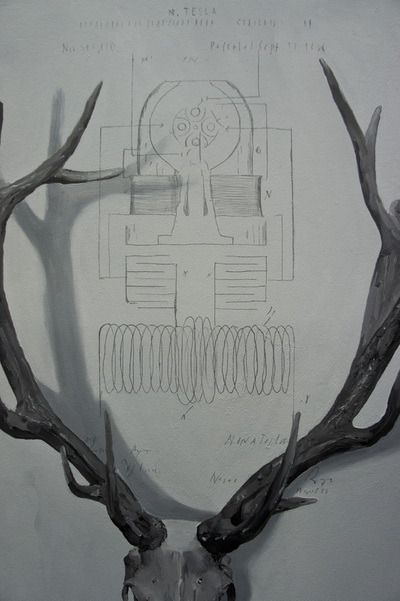 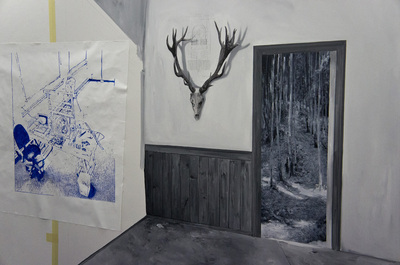 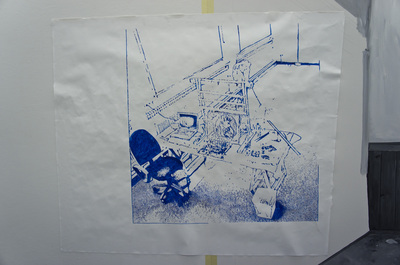 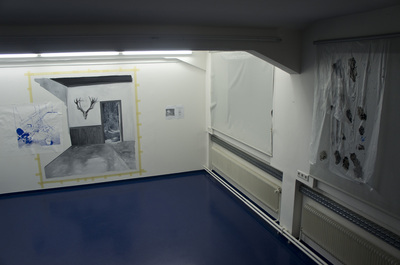 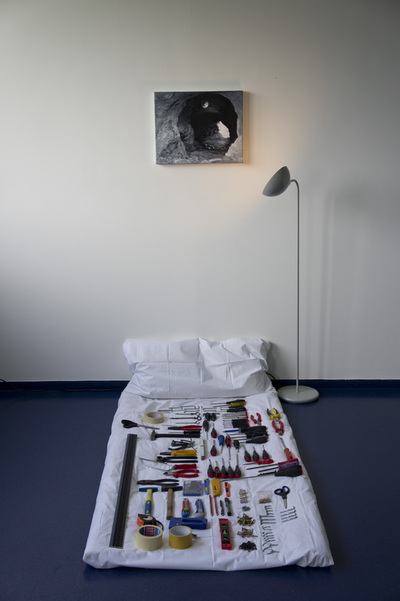 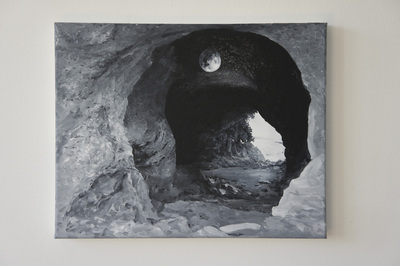 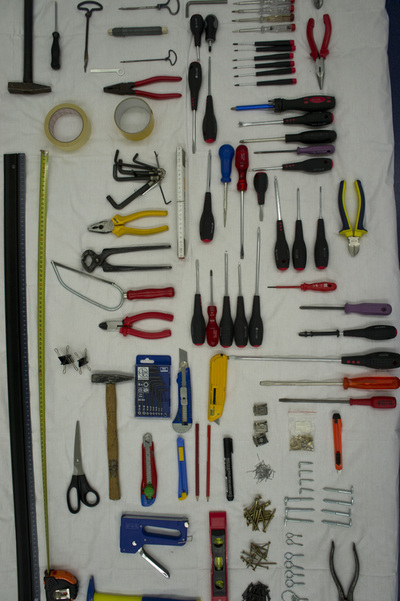 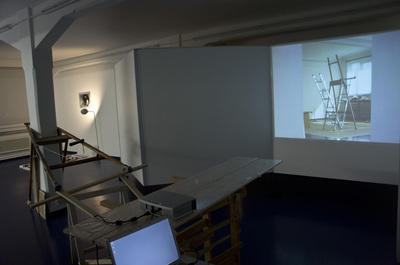 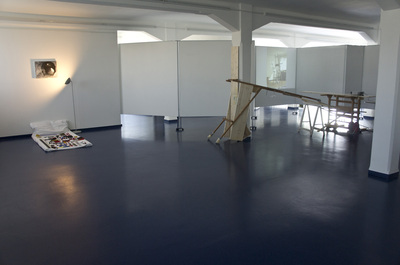 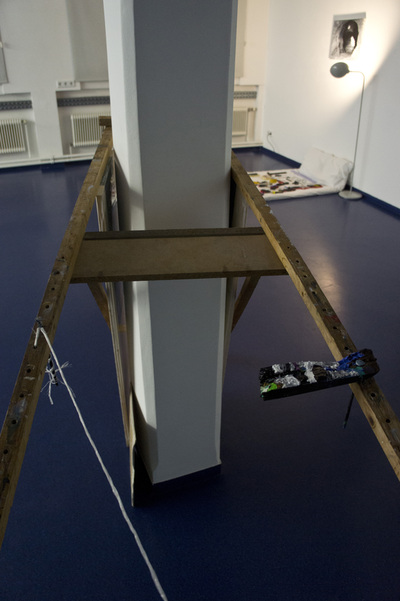 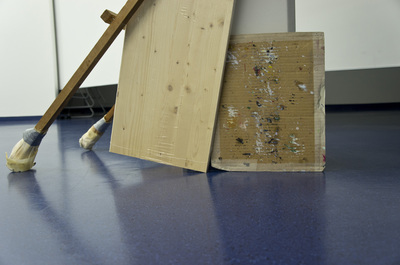 The Slideshow Included in the Project