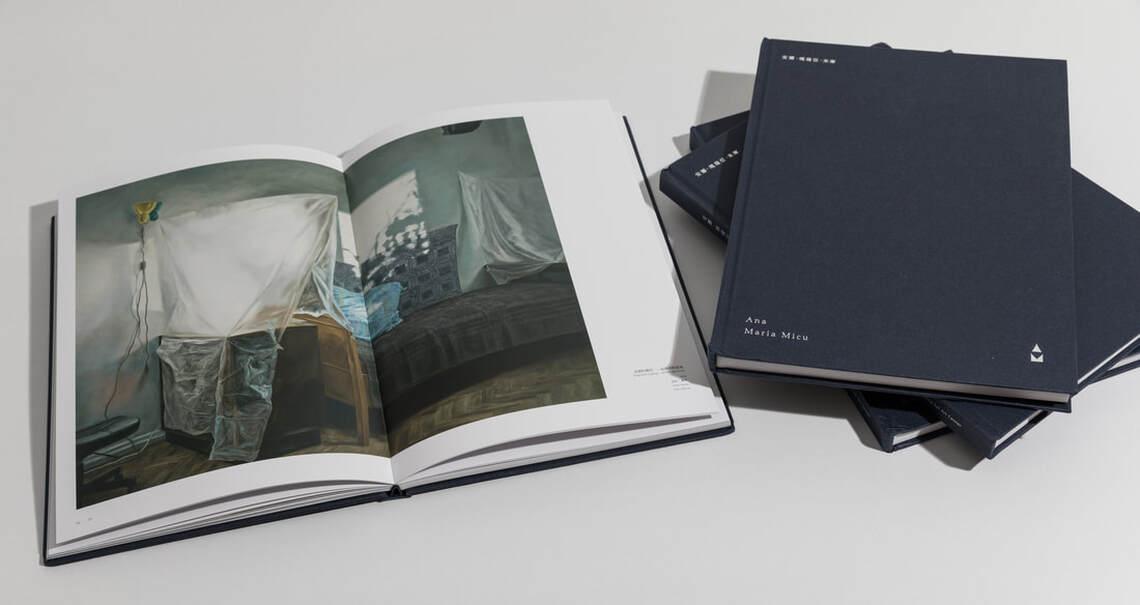 Ana Maria Micu ( with essay by Simona Nastac) - catalog published in 2019 by Andre Lee / Mind Set Art Center ISBN 978-986-94868-7-3
online purchase and acces to pdf version
I have a limited number of free author's copies of the catalog available. Should you want one, please leave me a message, on the Contact page, with the required details, and I would be more than happy to send one to you, as a gift, by regular post. I will cover the shipment costs (they are low ). Thank you!
​​Nature does not hurry, yet everything is accomplished  *

​
The artist is that person who, embarking upon her task, does not know what to do. However, her body is alert, open to the natural order of the world, aware that it does not abruptly end at the outside layer of its skin, but extends into its environment as much as the environment extends into it. To live is to spread out; the body never moves in an abstract space, but always in the middle of things, intertwined with them, reaching out and around and under and over and across, co-shaping each other in an ongoing processes of differentiation.

Ana Maria Micu’s art is rooted in this intimate engagement with the mixed realities of existence, both utterable and ineffable; she laboriously re-creates the world with her body in her work, relentlessly exploring the in-betweenness, documenting the flesh’s expansive dynamic and reversibilities in a system of free exchanges between seeing and the un/seen, as philosopher Merleau-Ponty, thinker of the primacy of embodiment, wrote in his influential book The Visible and the Invisible (1968). A corner of her studio: two unfinished canvases up on walls, fixed with tape; a cross-legged stand supporting a shiny black laptop, closed; a stool knocked over on the floor along with its blue striped cushion, a clean palette resting on its upper legs; a small wooden cabinet bursting with various liquid-filled receptacles and a silver tin can full of brushes falling down from the shelf; a large clear polythene sheet next, crumpled on a black chair; and a long cardboard tube thrown on the floor along with other unidentifiable, discarded packaging materials scattered throughout. Spots of sunlight ooze from one canvas portraying the artist from behind, face in profile, towards the other where she appears sitting down, half concealed by a curtain, only her legs visible in blue trousers, streching out as if from a photo booth.

Of course, this corner is a painting, a document of the way the body inhabits time and space, living “among the memories and the damage”, as Francis Bacon once fittingly said. Not a speck of dust in Micu’s studio though. The air is clean, thin with grey and bluish tones applied with the lightest of brushes, the artist is present, sitting in silent comfort outside of her work, only her split image and the intrusive sunlight mark her effort to displace the interrogative capacities of the perceiving body in productive ways. A series of instincts, thousands of questions that do not admit the closure of an answer, hundreds of tiny adjustments making the experience more specific and embodied in the particular, and something consistent, a presence that seems to have a plan emerges, leading the artist to her own higher ground. Speaking in an interview about this precise painting, named electric light,… Response to altruistic opportunities, Micu mentions cave paintings and the way the ancient artists followed the natural fissures and patterns on the stone, unearthing shapes that were already there, dormant, unsummoned. How was this done? Rather than looking at, or seeing an image, they saw according to, or with it; and in the process, their gaze became more loving (i.e. more gentle, nuanced, complex), gradually mastering a poetic vision where the seer and seen labour in complicity, powered by light. This is reflective of Ana Maria Micu’s practice as well, throughout her work. A practice she painstakingly perfected over the years, in quiet solitude, documenting how thinking and painting overlap, fold and unfold as things expand, contract, decay, dissolve, regenerate or repair.

Despite the isolation, occasionally strangers are welcomed in: plants, but most importantly her own hyperrealist self, multiplied by two but never entirely identical, as in presence with our own lives, he explores one (2016), night and water,… For some reason (2017), and more recently world inside… It suggests the sun (2018), and the intrusion of chance and… Pleasures (2018). With a fine-grained awareness of her own subjectivity, Ana Maria Micu seems to reference R.D. Laing’s sensitive book The Divided Self and his interpretation of what we call ‘normal’: a product of denial, splitting, projection, introjection and other forms of destructive action on experience. In her case, the withdrawal from the world as the indispensable condition for creation is her chosen form of denial and destruction. At the same time, the works can be understood as a critique of Cartesian subjectivity, in which the famous phrase cogito ergo sum is rejected as a device of the new solipsism in the digital era of detachment, isolation and alienation. Instead, the artist reasserts that the self is essentially social, that we must introduce the second person and think not from the standpoint of the ‘I’ alone, but of the ‘you and I’. The venerable tradition of the artist wishing to be a second creator can be called on too; yet, the more potent the portrait, the more fragile it seems.

The meticulous execution of these self-portraits echoes Albrecht Dürer, Chuck Close and others’ techniques. The way the details are drawn or painted so we almost see every strand of hair, every pore and the imperceptible changes in tone of the skin according to the movements of the body, as well as the product of all these details give the works a quality that is much more than the sum of what we see. They pose an identity problem: where do you stop and where is the real self? Perhaps this is another dimension of the hyperreal: that it permanently deflects the question of ‘where is the real?’ through its production of too much, so that one is unable to make a decision. The solitary and magnified scrutiny of the single figure also raises the following question: does the hyperreal actually make one anonymous or unknown to oneself? By foregrounding the situation in which people find themselves (i.e. the artist and other instances of herself generated by movement) – a suspended gesture or action, or a prolonged moment of reverie - , the works have the effect of pushing these figures who do not know one another into a shared, heightened milieu, producing a sense of more-than-reality: the elusive nature of space and time that defines our very existence.

In 2017, Ana Maria Micu started an ongoing observational drawing practice using video footage taken in her studio to document both her artistic practice and domestic actions. Her pictorial universe has always been one of overlapping fragments of reality, of worlds within worlds, of affective proximities and spatial juxtapositions built with photographic images, found or taken by herself. She employs the same combinatory, relational and interstitial logic of montage in her titles, using Google search keywords to extract returns that fit the image. But the video camera has expanded her field of research to concerns of process, time and change that permeate her recent creations even more visibly than before. The series of drawings The Apprentice with no Sorcerer (2017) or the ones that became dynamic frames in the animation What Hurts the Most is Left for Last (2018) are reflective of this new conceptual drive. Bodies are never static, nor are things: they are vibrant, oscillate within us, around us, beyond us; they rust, are trashed, written over by other things, by the elements, by aeons of human use. They can be massive – continents, oceans, the Earth’s core, or small – a room, a brush, dust. They are also inside us – foods, medicines, toxins. Matter folds and unfolds in various states, in systems of correspondences, patterns, and the contingent. How might a drawing or a painting record a grain of matter, discover its resonance, its metamorphosis into trace or absence, when they are matter themselves? – seems to be asking the artist in her tireless, ongoing space, the studio. There is no conclusive answer to this question, but by methodical examination of the in-between life of flesh and things, Micu has reached beyond the representational, opening up sites of refreshing materiality and signification. The world is entirely hers to recreate, as she grows together with the new plants in her apartment.